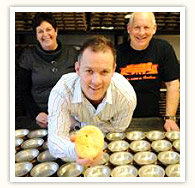 Marlow Pies have built a reputation for top quality and service and take pride in making sure each pie is made with tender loving care.  Our 100 percent wholesome fillings, lower-fat vegetable-based pastry and care for quality ensure Marlow Pies provide a ‘meal in a hurry’ sure to fill that hole in your belly.

Marlow Pies are delicious to eat, consistent in quality and can now be enjoyed throughout the South Pacific.  Our small business employs 25 hard working staff to bring quality Marlow products to a town near you every day.  Find the nearest stockist in your area. 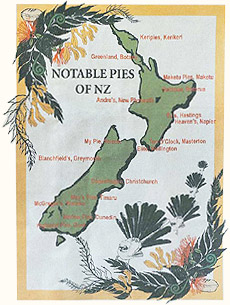 Marlow St. Pie Kitchen started in a historic butcher’s shop in Marlow St over 30 years ago.  Marlow’s is a family business that uses recipes handed down over three generations.  Karyn and Kelvin Williams took over the bakery in 1995 from Kelvin’s uncle, George Carse and his daughter Janice.

Shortly after taking over in 1995, Karyn and Kelvin saw an opportunity to take those same family recipes that were so loved in Dunedin far and wide.  To this end, the bakery was moved and expanded in 1996 to increase production with a careful eye on retaining the home-made flavour and chunks of real meat which made the pies famous.

After 20 years in the game, Marlows have combined with another long-time Dunedin company, Fishers Meat.  Fisher’s ready access to quality cuts of meat have seen the product range expand into new gourmet varieties long talked about.

Bronze for our Mince and Cheese pie!

Don’t just take our word for it – because we’re not the only ones who think our pies are some of the best around!

Marlow Pies was the only Otago company to feature in the national Bakels Supreme Pie Awards in 2010, scoring bronze in the commercial-wholesale competition section for our mince and cheese pie.

“There’s a real art to making a good pastry,” he was quoted in an Otago Daily Times article.

“It’s all in the way you fold it.  Fat contains water, so you have to layer it properly so the water turns into steam and creates the lift.  It’s also about treating the pastry gently and being nice to it.”

Our pies are not just famous in New Zealand either – Idaho student Ben Earwicker spent a year in New Zealand and rated our pies as one of his five wonders of the world!

In addition to the usual travel tips, Ben said visitors to New Zealand should “eat Marlow Pies and spend time on a sheep farm” – a good recommendation indeed!