Marlow Pies have always been known for their amazing pastry products bursting with home-made flavours and chunky fillings. The bakery began as a family business using recipes handed down through three generations.

Shortly after taking over from cousin Janice in 1995, Karyn and Kelvin Williams saw an opportunity to take the family recipes to the rest of the country.  The bakery was moved and expanded in 1996 to increase production with careful attention on retaining the home-made flavour and chunks of real meat which made the pies famous.

After 20 years in the game, Marlows have combined with another long-time Dunedin company, Fishers Meat.  Fisher’s ready access to quality cuts of meat have seen the product range expand into new gourmet varieties with great success. 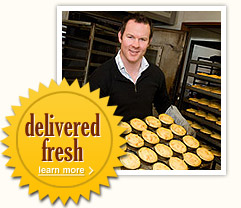